skip to main | skip to sidebar

By PETER WALLSTEN And JONATHAN WEISMAN

Some high-level Democrats are calling for President Barack Obama to remake his inner circle or even fire top advisers in response to what many party strategists expect to be a decisive defeat on Tuesday. 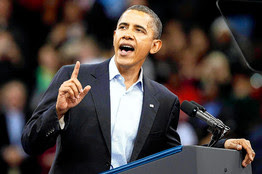 Tensions have come to the surface after meetings over the past few weeks in which Obama senior adviser David Axelrod discussed communications strategy with senior Democratic strategists and party officials. Some Democrats were so unhappy with the White House meetings, they started their own.

The strategy sessions aired a range of disagreements over how to help Democrats forestall an electoral drubbing at the polls—a defeat party strategists believe could have been minimized with a different White House playbook.

Obama coveyed an incoherent messae that didn't express what Democrats would do over the next two years if they retain power;

he focused on his own image than helping Democratic candidates;

and the White House picked the wrong battle when it attacked the Republicans for using "outside money" to pay for campaigns, an issue disconnected from voters' real-world anxieties.

"The money thing could work, but there's never been a larger frame around it to connect it to people's lives," said Dee Dee Myers, a consultant who worked for the Clinton White House when Republicans swept the 1994 elections. She said she participated in an Oct. 8 meeting with Mr. Axelrod and about 15 Democratic strategists at the White House.

A White House official defended the Obama Team's strategy. The pushback against the flood of advertising from outside conservative groups was vital, he said. "Candidates were being pummeled by those ads. Unless we raised the issue of who was paying for it all, they were going to get swallowed alive."

With less than 24 hours until voters go to the polls, the rhetoric between GOP leaders and President Obama is heating up. Plus, thousands show up for Jon Stewart's rally and the revival of political volatility.

He added that the White House emphasized its attacks on Republicans as a coordinated attempt with congressional Democrats to shift the race from a referendum on the economy and Democratic rule to a choice between Democrats and Republicans.

Nevertheless, interviews with Ms. Myers and other strategists in touch with the White House foreshadow the start of what Democratic strategists forecast will be finger-pointing and recriminations if predictions hold true and the party loses the House and suffers setbacks in the Senate. Mr. Obama is already planning to remake his economic team, but now strategists expect more pressure for a complete West Wing overhaul.

After Mr. Axelrod began his message meetings last September, House Democratic leaders began their own competing strategy conference calls about a month and a half ago, concluding Mr. Axelrod's pitch was missing the nuts-and-bolts discussions of the congressional election landscape. So far there have been about a half dozen sessions organized by House Speaker Nancy Pelosi (D, Calif.), Democratic Congressional Campaign Committee Chairman Chris Van Hollen (D, Md.) and Rep. Rosa DeLauro (D, Conn.)

"They just had so much faith in the president's ability to navigate all this and that no matter what the right threw at him, the president would have this force field of trust that would protect him," a House strategist said. "On the Hill, there's this sense that there are three [political] parties, the president, Democrats in Congress and Republicans in Congress."

That force field, said a number of strategists and officials, is comprised of Mr. Axelrod, Valerie Jarrett, press secretary Robert Gibbs and 2008 campaign manager David Plouffe. Some complained the White House, in its focus on building a 2012 reelection strategy, acted at times more in its own interest than that of Democratic candidates.

Another senior strategist who participated in a meeting with Mr. Axelrod said the White House hadn't grasped the economic concerns voters have— something he says Republicans seemed to understand.

"We ignored what voters were actually feeling and thinking," this strategist said.

Another former Clinton aide, Paul Begala, said he was "appalled" at Mr. Obama's decision to hold a fundraiser in Rhode Island, then declined to endorse Frank Caprio, the Rhode Island Democratic gubernatorial candidate. Obama aides said the president acted out of respect for the independent candidate in that race, former Sen. Lincoln Chafee, who had endorsed the president.

As if to underscore the chaotic nature of the moment, Mr. Caprio said the president could take the endorsement and "shove it."

Republicans are poised for large gains, likely retaking the House and gaining seats in the Senate, amid strong voter frustration with Obama and Congress, a WSJ/NBC poll shows. Peter Wallsten discusses. Also, Paul Vigna and David Weidner discusses why Wall Street is now a bit worried about the prospect of legislative gridlock.

"Everyone over there (at the White House) in a senior capacity has to own this," said a party official working on major races. "They spent '07 and '08 asking to be in charge. Now they're in charge, and when you're the leader the buck stops there."

Some senior strategists are expressing dismay publicly. A September memo by Democratic pollster Stanley Greenberg criticized the White House pitch that a vote for Republicans is a vote for "going backwards" to the policies of George W. Bush.

"After hearing this battle of Republican and Democratic messages, eight percent shift their vote to support the Republican, while only five percent move to the Democrats," Mr. Greenberg wrote. "We lose ground. These messages are helping the Republicans."

Mr. Greenberg then told a forum hosted by the liberal blog Fire Dog Lake he was "really puzzled over Democratic leaders stuck in a message that demonstrably doesn't work."

The discontent with the White House messaging and communications has come in waves. In early September, House Democrats returned from an August recess that they thought they had handled well, one senior Democratic strategist in Congress said. At least they hadn't suffered the spectacle of the previous August when angry town hall meetings dominated the news.

But, the strategist said, those good feelings were swamped by what Democrats saw as the president unnecessarily wading into the controversy over the construction of an Islamic Center in Lower Manhattan.

"It's been a struggle for Democrats to figure out how you close with an electorate filled with anxiety, who are not sure what Democrats have been doing has worked," says one House Democratic aide. "To say we will continue doing what we're doing is not a winning argument.
Posted by itzik basman at 4:55 PM

itzik basman
I got my B.A. in English Literature from the University of British Columbia ("U.B.C."). I got my Secondary School Teaching Certificate from U.B.C. and my Masters degree in English Literature from U.B.C. writing my 125 page Masters' Thesis on the novels of Mordecai Richler. I attended Osgoode Hall Law School in Toronto, graduating with my Juris Doctor . After articling and completing the Ontario Bar Admissions Course, I was called to the bar in Ontario. I have practiced law to date in Toronto, specializing in Family Law, Civil Litigation, and Appellate Advocacy. I have pleaded cases in all civil Ontario courts, including many times in the Ontario Court of Appeal, as well as the Supreme Court of Canada. I practice law under the firm name Itzik Basman Barrister, James Rose, my former associate, having died January 23, 2011. I published on line in 2004 my extended essay on "Hamlet, entitled Futility As Tragedy: An Interpretation Of Hamlet". It can be found at Lulu.Com. It was critically reviewed both in Kritikos and Politics and Culture. I live in Toronto.